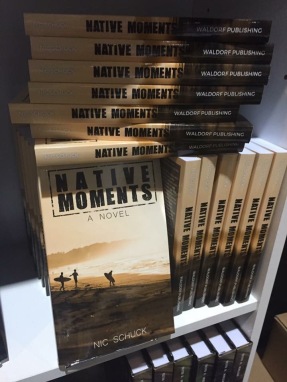 When I found out I was going to Chicago for Book Expo America, the first thing I did was google “what do writers do at book expo america” and different variations of that. I didn’t find too much out there to tell new writers what to expect. I read a really good blog post called “Don’t Pay Money for BEA Book Promotion.” After attending, I agree with that statement, but if you are in the situation like I was in where your publisher has a table and you don’t have to pay for a ticket to the event, then go. If I would of paid the $400 or so it costs for an author’s ticket, I’m not sure it would have been money well spent. Because I didn’t pay for the ticket, it was a great trip and want to attend another one.

Walking into Book Expo was pretty overwhelming. Here is a very small section:

At this point I had never met my publisher or editor or anyone at Waldorf Publishing and walking in, my excitement was geared toward seeing my book in physical form. Seeing it sitting there on the shelf was pretty fantastic. It made it real. Up until then, in the back of my mind, I had this sneaking suspicion that this was all a very elaborate prank. For some reason, I couldn’t quite accept that someone had agreed to publish my book. But there it was. 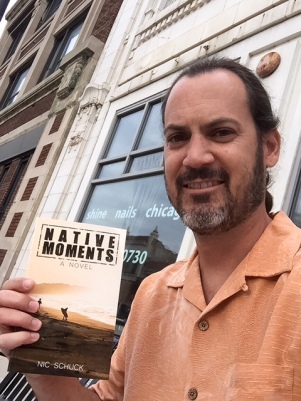 I waited until I was outside to take a selfie with it. Inside BEA I couldn’t wrap my head around the scope of the publishing industry. It’s massive. Besides the Big Five, there are countless of small publishers. At the Waldorf booth, nearly every author that is being published in 2016 was there and it was a bit crowded so I grabbed a few tote-bags and put my publisher’s catalog and a copy of my book in there and walked the floor. I’d walk by people and scope out their badge and if it said blogger I would make a snap judgment on the person and wonder if they were the kind of reader that would like my book. I would try to decide just by their look and clothing if they were the type of person to be offended by characters excessively drinking, taking hallucinogenic drugs and having risky sex. After passing by too many people, I convinced myself how stupid that was. The more people had my book in their hands the better, right? If a person likes a product they might tell three people, but if they don’t like a product they will tell twenty. That was the thinking that forced me to start stopping random people and talking to them. Most people were excited to hear that my first book was being published. Few people said they had specific books they were looking for and didn’t have enough room to take back a ton of books. That was completely understandable. Other people, just weren’t interested in talking to a stranger. And that was cool, too. If I’ve learned anything during this process it’s that rejection is part of the industry. You can’t take the word “no” personally. Once I handed out about ten or so tote-bags, I walked around and checked out other booths. That was pretty fun to see what other books are coming out and to see what other publishers are doing. It was cool to feel like I had inside knowledge of the publishing industry. Apparently, they don’t sell beer inside BEA. I figured that would’ve made stopping random people easier. Alcohol is pretty good asset for networking events.

I would go back to the Waldorf booth and get more books and tote-bags  and walk some more. One of the times at the booth, I was speaking with some one about my book and they asked if I would sign it for them. I felt like a tool. Why the hell did this person want my autograph? I quickly overcame that self-consciousness and picked up a sharpie and signed about forty books. My signature became more confident the more I signed.

When the day ended I headed back to the hotel. This was the first trip I had ever taken solo. It was a strange feeling being able to do whatever I wanted at any time. I didn’t have to compromise on activities. Was always a Cubs fan so a trip to Wrigley was a must. I took the “L” and found a $15 ticket to a night game. I had to ask around to a few different scalpers out front before I found that cheap of a ticket. Once in, I scoped the stadium for the closest empty seat and sat down as if it was where I belonged. I’ve learned you can get away with a lot of things if you just act like you belong there.

When the game ended I headed back to the Loop and grabbed a beer at Kasey’s Tavern before going to the hotel. I shared an elevator with Jane Lynch. Nobody said anything to her while we were on there. When she stepped off the lady next to me said, “Did you see who that was?” I said I did.

I walked into BEA at 9am and was more confident since I was a veteran now. I stayed by the publisher’s table this time and it was much easier to talk to people. I didn’t feel so much like a salesman because people were coming up already interested. As the day went on more authors arrived and again the publisher’s booth got hectic so I walked around. George Saunders was doing a signing on advanced copies of his first novel coming out in February 2017. Having read The Braindead Megaphone

and CivilWarLand in Bad Decline: Stories and a Novella

I was a fan and waited in line for about forty-minutes to get a signed copy. I slipped a Native Moments bookmark, too. Hope he orders it and reads it.

The other thing I noticed: Kiddie Lit is king in the publishing world. So many goddamn kid books. And adult coloring books. Tons of fucking color books. That’s cool and all if you like coloring, but does it really belong in world of words? What do I know?

This was the only day I would really have to explore Chicago. I left BEA at 1pm and hopped the “L” train to Oak Park. It was about an hour ride, but I wasn’t going to come to Chicago and not see the birthplace of Hemingway. In fact, beside seeing my book in print and signing my first book, this was the highlight of the trip. Oak Park was a neat place. The architecture looked fake like it was designed by the people at Epcot.

When the museum closed I got a beer at Oak Park Brewery. Interesting spot. They have drag shows on the weekend. I had never been to a brewery/drag show. Still haven’t. They only do it on Fridays and Saturdays and this was a Thursday. I took the “L” back into town and got a beer at Rock Bottom Brewery. I then walked to Navy Pier and then through Millennium Park. 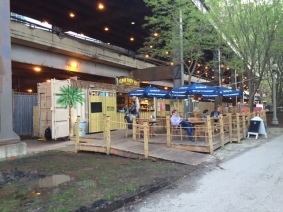 I had a recommendation from a friend in Pensacola to go to the Billy Goat Tavern. That it was an iconic establishment in Chicago. You know, “Chezzeborger, Cheezeborger, Cheezeborger.” I google mapped the location and walked a couple miles through town and when I arrived I didn’t realize the one I was at was not the original. There are multiple locations. 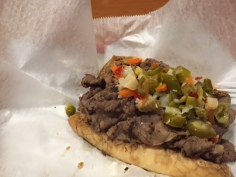 I didn’t feel like eating a cheeseburger and ordered an Italian Beef. The locals sitting at the bar next to me asked why the hell I ordered that. I told them I didn’t feel like eating a cheeseburger. That’s when I was told that the tradition is to eat a cheeseburger at the original Billy Goat. I finished my sandwich and beer and eavesdropped on these folks next to me who were bitching about another bar owner who had just closed his bar without any warning to the employees. The lady next to me, just fifteen minutes ago, found out she was unemployed. The owner walked in and shouted, “Get all these Malakas out of here. We are done.” I had to look up the word malaka. He then stormed out and the workers started pouring everyone large drinks and handing out full bottles and by the time these people arrived at Billy Goat and sat next to me they were smashed. One guy lay his head on the bar and started snoring. As entertaining as it was, I wanted to see the original Billy Goat Tavern of SNL fame. I was disappointed. I didn’t eat. There was no local characters like at the last one. It was all tourists. I walked in and walked out. 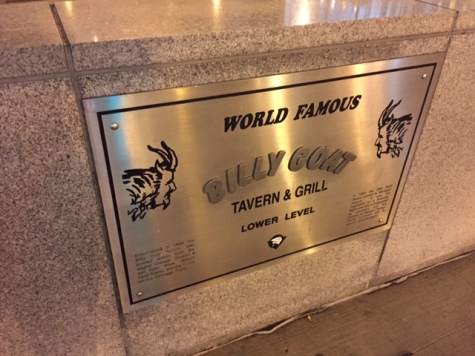 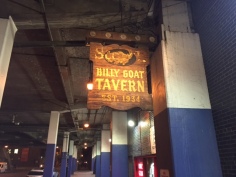 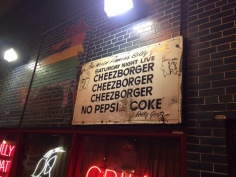 The same friends recommended another bar, Three Dots and a Dash. Cool Polynesian themed place, but I had to wait in a line for twenty minutes and then the drinks were $15. I have a problem paying over $10 for a drink. I had one and left.

I walked back enjoying more of the architecture and by the end of the day had walked fifteen miles. 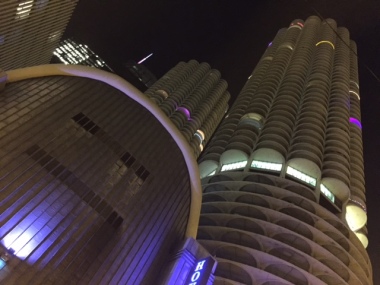 Scored a Richard Russo signed advanced copy. Oh wait, I was here to promote my book. By this day I was really getting my one minute pitch down and began to speak more personally about the book. Calling it a surf adventure set in Costa Rica could interest a few people, but when I mentioned how the main character, Sanch, went to Costa Rica after his brother had died of a heroin overdose and he was over there looking for an alternative to the American dream, I really started getting people’s attention. The heroin abuse among veterans really struck a chord with many people and I know that and it makes sense, but I want people to read the book and get the emotion from the writing as opposed to me telling them about it. But in order to get people to read the book, I had to give them a reason to want to. Don’t worry I didn’t spoil anything. This is all revealed very early on in the book.

If your publisher has a booth and you are invited without having to purchase a ticket, go. If I wasn’t there to talk about my book and sign books, my book would’ve just sat on the table and nobody may have even picked it up. Your publisher has many books they are promoting. It is up to you to promote your book. Nobody is going to give it the attention that you will. Would I pay for booth on my own if I were a self-published author or would I buy a ticket as an author just to go? No. Better ways to promote your book. Hell, I had great success with just having bookmarks in my pocket and then talking to people at the bar next to me and giving them a bookmark. Shameless self-promotion is a must.

is available for pre-order on Amazon and comes out September 15th, 2016.